A Stalemate Ukraine Can Win

The crowing began before the battle of Debaltseve had even... 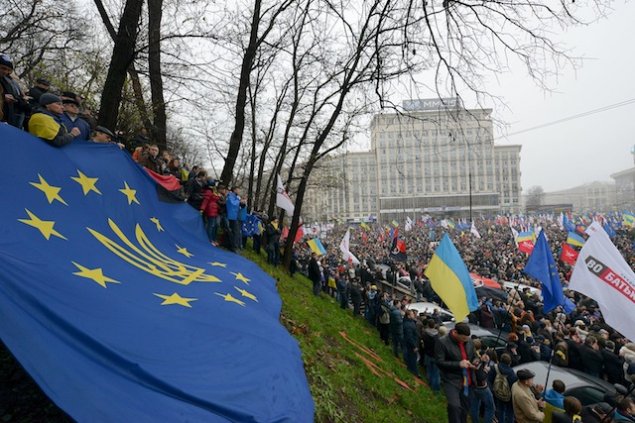 Federalism need not be a dirty word in Ukraine. There are many power-sharing examples available to follow, that would keep the country together.

In Kyiv, ‘federalism’ has become a dirty word, reports the International New York Times (April 17, 2014). In the view of the Yatsenyuk Government, federalism will tear the country apart, and Ukraine will never escape Russia’s grasp. The Ukrainian parliament is so convinced of this, in fact, that it has adopted a resolution barring diplomats from negotiating constitutional revisions at the latest Geneva talks.

There is little doubt that the current circumstances where Ukraine is being threatened by a powerful neighbouring state are not ideal for considering major institutional change. At the same time, it seems reasonably clear that the current unitary structure is unlikely to placate Russian-identifiers in the east, or to get Crimea back. In fact, instead of threatening Ukraine’s unity, a properly designed federalism may be the best, indeed the only, way to keep Ukraine together over the long term.


What would a proper federal design look like? Providing they can be agreed upon by genuinely representative elites, the most stable federations are those with more federal units rather than a few. Fifty (the United States) is much better than two (the old Czechoslovakia). It would not be good, in other words, if the Ukrainians agreed, or felt bound, to divide their state into west (the pro-EU part) and east (the more Russophile part, and base of former President Yanukovych’s Regions Party). Every divisive issue would then pit these two parts against each other, and break-up would be only a matter of time. Multi-federal regions, by contrast, would allow floating alliances, which would not always pitch Russophiles against Europhiles; furthermore, they would also create paradoxically useful feasibility and coordination problems that would stand in the way of secessionist tendencies.

The key to success will also lie in combining decentralisation with power-sharing at the level of the federal authorities in Kyiv. At least some of the current problems Ukraine is facing, have resulted from the extraordinarily foolish decision of the pro-Western parliament, flush with the success of the Maidan protests, to rescind measures that promoted Russian as an official language in certain regions. Even if we blame Russia for Ukraine’s problems, it was this prior step (subsequently dropped) that gave Russia its casus belli. To prevent a recurrence of anything similar, or of the traditional recent pattern in which the central government represents either the east or the west, but not both, Ukraine’s federal government would have to be formally set up on power-sharing grounds. This would ensure that the government would be fully representative of Ukraine’s complex different ethnic, linguistic and religious identities.

There are different power-sharing models available; for example, under the Belgian constitution, half of the cabinet must be French-speakers, and the other half Flemish-speakers. If the Ukrainians did not want to engage in these sorts of corporate or ethnic ‘quotas,’ for fears that they might entrench divisions rather than alleviate them, they could instead consider ‘liberal’ power-sharing. It would be possible, for example, to have constitutional provisions, which simply specify that any party with a certain percentage of votes would get a cabinet ministry. Such percentages have been set at 5% in South Africa (1994), 10% in Fiji (1997) and Burundi (2001). As long as there is no ethnic requirement favouring any particular group, this could be a fair, negotiable and liberal arrangement.

Even more relevant for Ukraine may be the institutional innovation introduced in the 1998 Good Friday Agreement in Northern Ireland: the D’Hondt executive. Unlike the three examples just given, the D’Hondt formula provides for automatic executive formation, immediately after an election is held. No post-election bargaining is needed between parties over the number and type of ministerial portfolios that are allocated to each party. These divisive questions are all handled, in a proportional and fair manner, by the d’Hondt allocation formula. Parties that did not want to be in government could opt for opposition. By avoiding risky and time-consuming negotiations after the upcoming May 25th elections, the d’Hondt mechanism would eliminate critical delays in the formation of an inclusive coalition, inviting elected Russians to government unconditionally.

Northern Ireland’s innovation in sharing power differs from conventional forms of power-sharing such as the Bosnian or Lebanese systems where specific posts have been assigned to one ethnicity or where certain constituencies have been excluded. In such cases, in response, the ‘ostracised’ group resorts to violence and secession. By way of contrast, the prospect of an all-party inclusive and proportional cabinet increases the chances of negotiating a settlement in the first place. Such a power-sharing coalition will offer more ‘transparency, inclusivity and accountability’ in line with the principles of the Geneva peace deal.

Creating a fair power-sharing mechanism would be a good place to start in Ukraine. Once a government is formed, negotiations for decentralisation and federalism could then take place in an environment of increased trust. Inclusivity at the centre would reduce secessionist demands, while federalism will allow each community to run its own domestic affairs with less demand for common decision-making, and hence, fewer deadlocks.

Admittedly, Ukraine’s fears of federalism are not unprecedented, and should be respected. But many countries facing comparable situations, including Spain, India and South Africa, have federalised in practice without adopting explicitly a federal terminology.

Ironically, even though Ukrainian diplomats have entered the Geneva talks opposing federal principles, Kyiv has been surrounded at the table by all-federation participants: their Russian opponents, US/EU allies and Swiss hosts.

Neophytos Loizides is a Senior Lecturer at the University of Kent. His book Designing Peace Process: Institutional Innovations in Cyprus and Divided Societies is forthcoming with the University of Pennsylvania Press. John McGarry is Professor in Political Studies and Canada Research Chair in Nationalism and Democracy at Queen’s University in Kingston, Ontario.