Pakistan paramedic 'stole baby to give to childless aunt' 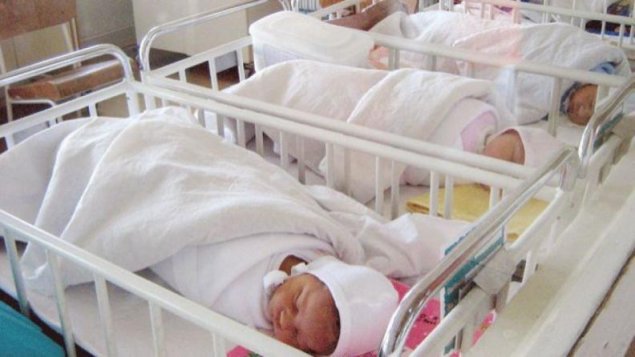 The little girl has not been given a name yet

A paramedic in Pakistan has been arrested after allegedly stealing a baby to give to her childless aunt.

The little girl was taken shortly after birth from a hospital in Balochistan, in the south-west of the country. But the family was initially unaware of her disappearance as no-one revealed her mother had given birth to twins.

The first they knew was when the girl's mother regained consciousness and asked where "the other girl was", her brother-in-law told the BBC.

The FBI said I was my parents' stolen baby - but I found the truth
Abdul Hamid had taken the mother-to-be, Jamila Bibi, to the hospital in Loralai, about 60km (37 miles) south-west of their village, on Wednesday, police said.

He told police that after delivery, Jamila Bibi's family was handed one little girl and told to take the patient home as she was doing fine.

However, Jamila Bibi remained in a semi-conscious state for the next couple of days, during which time the twin she had returned home with died.

And then - once she recovered - the new mother revealed something which left the family startled.

"On Friday, when Bibi had recovered her senses, she asked where her other girl was. We were stunned," Abdul Hamid told the BBC.

"After Abdul Hamid filed a police complaint, we arrested the female paramedic who was on duty at the delivery room that night, and she led us straight to where the baby was," Jahangir Shah, additional head of Loralai police station, said.

"She had been helped by two other colleagues to smuggle the baby out of hospital and give it to her aunt who was married 17 years but was still without a child. The nurse told us her aunt had been badly wanting to adopt a baby."


The police have arrested all four women, while the family has been reunited with the baby, who has yet to be named.

The alleged kidnapping was unprecedented, experts told the BBC
Officials blamed the incident on the absence of procedures, such as tagging of new born babies, and lax security at exit points.

A senior gynaecologist at Bolan Medical Complex in Quetta, the capital of Balochistan province, told the BBC the incident was unprecedented but a cause for worry.

"None of the government-run hospitals in the region have safety procedures such as tagging of mother and the new-born baby or their biometric registration which could then be verified at exit points of the hospital," she said, requesting not to be named.