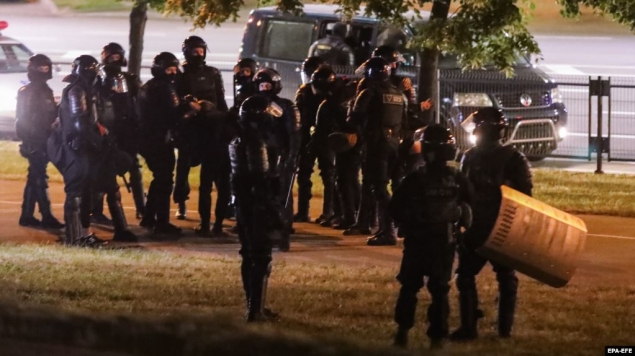 Belarusians defied a harsh crackdown in a fourth day of protests on August 12 that spilled into the night as pressure mounts on President Alyaksandr Lukashenka over a weekend vote the opposition says was rigged to extend the strongman’s 26-year rule.

Thousands of protesters hit the streets in Minsk and elsewhere across the Eastern European nation, braving the threat of beating and detention as Belarusian authorities admitted on August 12 to using live ammunition against protesters and news emerged that a second person had died in the unrest.

The spontaneous protests took many forms and came as riot police since the August 9 disputed election have used tear gas, rubber bullets, and stun grenades to disperse protesters in the capital and other cities.

In an interview with RFE/RL during a visit to Prague, U.S. Secretary of State Mike Pompeo said that "we’ve watched the violence and the aftermath, peaceful protesters being treated in ways that are inconsistent with how they should be treated."

Pompeo said that the United States had not yet settled on the appropriate response, but would work with Washington's European partners to determine what action to take.

EU foreign ministers are expected to meet on August 14 to discuss imposing sanctions on Belarus, which were previously lifted in 2016.

In several parts of Minsk on August 12, groups of hundreds of people formed human chains to protest as people in cars honked horns and slowed to a crawl to block police vehicles. Similar protests were held in at least five other cities, according to the Belarusian rights NGO Vyasna (Spring).

More than 130 doctors took part in an action against violence in Minsk, gathering in white coats on Dzerzhinsky Avenue near the medical university with flowers and posters. According to the doctors, they came out to show that "we are all together."

On Dzerzhinsky Avenue, people stood on balconies, clapping in an expression of support for protesters. A group of riot police arrived and fired rubber bullets.

In Minsk and other towns, women dressed in white joined hands to form a human chain to protest the postelection crackdown.

The latest protests came as authorities said more than 6,000 people have been detained and hundreds injured in protests since the August 9 vote, which the electoral body said Lukashenka won with 80 percent of the vote while the official tally for his main rival, Svyatlana Tsikhanouskaya, was less than 10 percent. Tsikhanouskaya has left the country and is now in Lithuania.

Hundreds of relatives of detained people gathered in front of the central detention center in Minsk on August 12, trying to get information about their loved ones.

Earlier on August 12, the Belarusian Interior Ministry said that a man was wounded in the western city of Brest overnight after law enforcement opened fire at a group of people who, police said, attacked them with iron bars.

It was the first such admittal by Belarusian authorities that live ammunition had been used against protesters.

The Investigative Committee also admitted a 25-year-old man detained at a street protest in Gomel died after being transferred to a prison and then a hospital, making him the second person killed in the unrest.

The victim's mother told RFE/RL that her son had not participated in protests and was going to see his girlfriend when he was rounded up by police. She said her son had heart problems and believed he had been beaten.

Meanwhile, an RFE/RL journalist and his wife were stopped by police in Minsk as they were driving. Vitaly Tsyhankov was pulled from the car by police, beaten, and thrown to the ground, before being detained, his wife said. She was also detained.

The assault on the RFE/RL journalist came as the Belarusian Association of Journalists issued a statement on August 12 calling on the authorities to stop targeted violence against media representatives.

The journalist group said security forces have deliberately used violence against the media, intentionally damaged their equipment, and detained at least 12 journalists covering the unrest.

Belarusian Nobel Prize-winning writer Svetlana Alexievich condemned the police violence against protesters, telling RFE/RL that “authorities have declared war on their people” and Lukashenka should step down to prevent a bloody civil war.

“Leave before it's too late, before you have plunged the people into a terrible abyss, into the abyss of civil war,” the 72-year-old author said in her first remarks since the election. “Nobody wants blood. Only you want power. And it’s your desire for power that requires blood.”