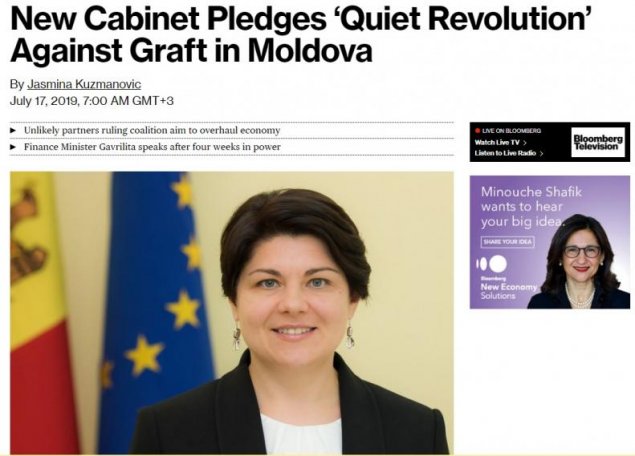 Natalia Gavrilita used to run a charity. Now she’s finance minister of a country that has become a byword for corruption and says her modest goal is just to make it normal. That will be a lot harder than it sounds.

Just a month after her party prevailed in a Venezuela-style standoff between two rival governments that both claimed power, Gavrilita is pledging to crack down on endemic graft, prune a sprawling web of inefficient state companies and jail corrupt oligarchs who’ve dominated politics in the decades since the 1991 fall of communism.

She’s also trying to steer her country toward international markets and reduce its dependence on the International Monetary Fund. The fraud case that triggered the rescue siphoned about 1 billion euros ($1.1 billion) from the nations banks in 2014 and remains unsolved.

Gavrilita’s pro-European Union Acum party, led by Prime Minister Maia Sandu, came to power after unexpectedly clinching a ruling pact with its ideological opponent, the Russian-backed Socialists. For now, in a rare appeal to stability, the two sides have shelved differences that have kept the former Soviet republic’s orientation stuck in a limbo between the East and West.

“We are calling it the Quiet Revolution in Moldova,” Gavrilita said in an interview at a conference in Dubrovnik, Croatia on Monday. “We’ve been very much aware that other revolutions have not fulfilled people’s expectations, so we are careful with how we use this window of opportunity to change the status quo.”

The country of 3.5 million is still smarting from the political clash between Sandu’s government and the former ruling party. Backed by Moldova’s richest man Vladimir Plahotniuc, it initially refused to relinquish power until it bowed to international pressure. The political confrontation was only the latest episode of turmoil that has helped push the economy into contraction three times since 2009, according to the World Bank.

Last year, Moldova ranked 117 out of 180 nations in Transparency International’s Corruption Perceptions Index. Now the question is whether Sandu’s Acum party can assert control of state bodies that for decades have suffered from influence of corrupt officials and vested interests. Another is whether the Socialists, waiting in the wings, will help or try to capitalize on any setbacks.

“We are still working very hard to clean up government institutions,” Gavrilita said.

Among the government’s first tasks will be to break up monopolies, install a “proper competition authority” and increase transparency in public procurement. It also wants to orient the economy toward higher value of products, such as the growing IT sector and advisory services, she said.

Her plan includes forcing state-owned companies to pay dividends to create “significant fiscal space,” while every ministry is reviewing operations in the fight against graft.

“One of the key things is to make the people who are guilty of corruption responsible, to punish them and send them to prison,” she said. “The evidence of crime and mismanagement is overwhelming.”

Gavrilita, 41, was managing a charity in London when she got the call from her former colleague Sandu and the offer to take over the Finance Ministry. A Harvard Kennedy School graduate, she’s part of a cabinet where six of the 11 portfolios are held by women. Sandu is a former education minister and World Bank adviser.

While the government has the tacit support of Moscow for reforms, challenges remain for the coalition, including differences over potential EU membership. Another major issue is its frozen-conflict with Russia over the separatist Transnistria region.

“We can use this opportunity to set aside geopolitical discussions and concentrate on policies we really need, regardless of whether Moldova at some point chooses the East or the West,” Gavrilita said. “Right now we need to focus on reforms and bring normalcy to the country.”