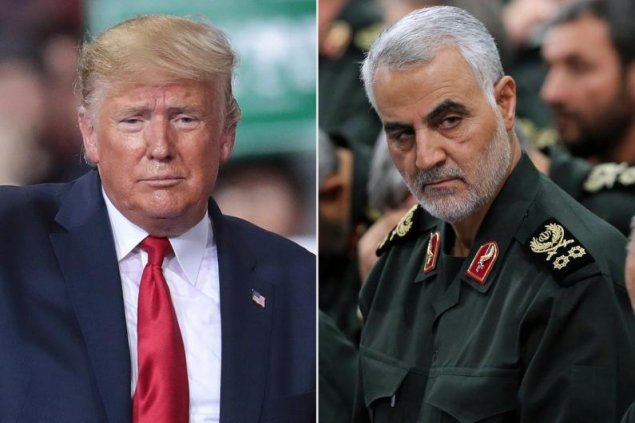 Washington (CNN)Days after President Donald Trump claimed the US killed Iran's top military general because he was targeting four American embassies, two of the President's top national security officials are declining to provide evidence of the intelligence used to justify the US drone strike.


In interviews that aired Sunday, Defense Secretary Mark Esper and national security adviser Robert O'Brien both did not cite specific intelligence information when pressed by their interviewers. Trump said in an interview Friday that he approved the military attack earlier this month that killed Qasem Soleimani because he believed the Iranian general was targeting the embassies.

"The President never said there was specific intelligence to four different embassies," Esper told CNN's Jake Tapper on "State of the Union." But Esper said he shared the President's belief that the embassies were threatened by Soleimani.

Similarly, O'Brien conceded in an interview on Sunday with ABC that it was unclear whether embassies or US military bases would be targeted, but insisted Trump's claim about four embassies being threatened was "consistent with the intelligence."

The messaging this weekend from the top officials adds to an already complicated explanation of the intelligence the Trump administration claims was behind the US attack that killed Soleimani. In recent days, Trump's national security officials have contradicted each other about how imminent a threat the Iranian general posed, whether they had specific intelligence on the threat and even what that threat was, with Trump saying one thing then another, while officials offered varying explanations.

Aaron David Miller, a senior fellow at the Carnegie Endowment for International Peace, told CNN last week that the administration's "public messaging has raised all kinds of questions about whether or not there was sufficient motivation to launch an attack to kill arguable the second most powerful and important man in Iran."

Both O'Brien and Esper continually pointed on Sunday to the concerns about the US Embassy in Baghdad, indicating the most specific intelligence was in regard to a threat there. But neither official provided intelligence indicating an imminent attack on all four.
"We were very concerned about the situation. We had exquisite intelligence," O'Brien told NBC's "Meet the Press."

When O'Brien appeared on "Fox News Sunday," he said the administration knew there were threats to American facilities.

"Look, it's always difficult, even with the exquisite intelligence that we have, to know exactly what the targets are but it's certainly consistent with the intelligence to assume that they would have hit embassies in at least four countries," he said.

O'Brien continued: "But again, we knew that there were threats to American facilities. Now whether they were bases, embassies -- you know, it's always hard until the attack happens, but we had very strong intelligence they were looking to kill and maim Americans at US facilities in the region."

The messages from the Trump administration have taken some lawmakers by surprise, with Democrats and Republicans saying they were not informed of the threat to four embassies during an intelligence briefing last week.

"I didn't hear anything about that. And several of my colleagues have said the same. So, that was news to me," Republican Sen. Mike Lee of Utah told Tapper on Sunday.

Sen. Chris Murphy, a Connecticut Democrat, wrote in a tweet last week that "if there was evidence of imminent attacks on four embassies, the Administration would have said so at our Wednesday briefing."