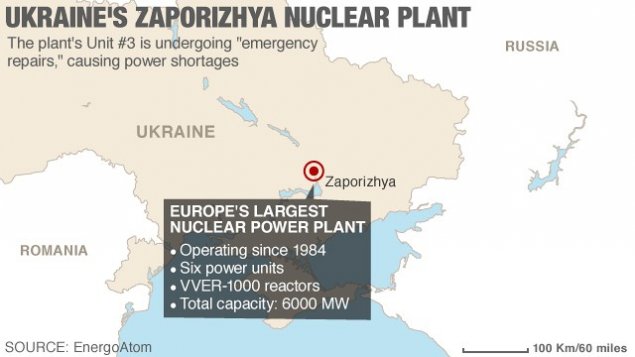 A short-circuit has impaired part of a nuclear power plant in southeastern Ukraine, causing power shortages in parts of the country but putting no one in danger of radiation, the country's newly appointed energy minister said Wednesday.

The incident at the plant in Zaporizhya happened last week, and emergency repairs should be finished by Friday, the Energy Ministry said.
"There is no threat to the reactor," Energy Minister Volodymyr Demchyshyn said. "This is a technical problem that is currently being solved."

The short-circuit happened in a power output system, he said. Information on what caused the problem in the plant's third block wasn't immediately available. Low temperatures had recently caused an increase in demand for power, the ministry said in a written statement earlier this week.


"The imbalance of the power supply is due to the emergency repair of the energy unit #3 in Zaporizhya nuclear power plant, as well as inadequate supplies of coal in the power plants' warehouses," the Energy Ministry said in a statement Tuesday.
"The situation is under control, and the unit will be under repair until December 5th."
A ministry spokeswoman told CNN that the incident happened Friday but was announced only on Tuesday because people started asking about the power shortages.
The media office of EnergoAtom, the state nuclear power plant operator, said the internal generator safety system cut off the transformer for the plant's third unit.
Zaporizhya is Europe's largest nuclear power plant, according to EnergoAtom. It has been operating since 1984, with the third unit brought online in 1986. It has six power units altogether, with a total capacity of 6,000 megawatts.
Zaporizhya is in territory controlled by the Ukrainian government in Kiev. It is about 200 kilometers (125 miles) west of the city of Donetsk, which is a stronghold of pro-Russian rebels that have been battling Ukrainian forces for months in southeastern Ukraine.
The plant is about 520 kilometers (325 miles) southeast of Chernobyl, the Ukrainian community where a nuclear power plant reactor exploded when Ukraine was part of the Soviet Union in 1986. It is estimated that more than 4,000 cleanup workers died and close to 70,000 were disabled from radiation-related causes.
According to the United Nations, the explosion and fire that occurred at Chernobyl affected, directly or indirectly, 9 million people because of radioactive materials released into the atmosphere.