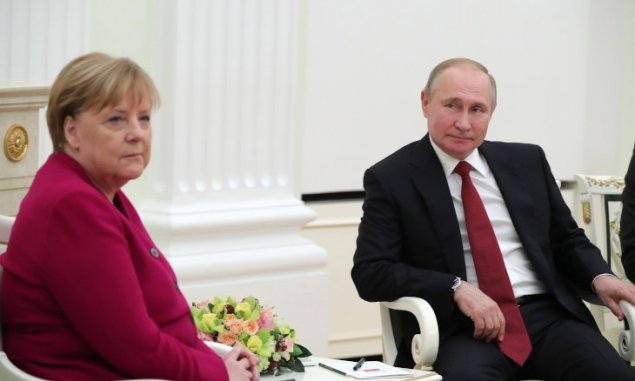 German Chancellor Angela Merkel said Libyan peace talks will be held in Berlin, as the internationally-recognized Government of National Accord (GNA) and Libyan National Army (LNA) reached a ceasefire upon Turkey and Russia’s initiative. During a joint press conference with Russian President Vladimir Putin in Moscow on Jan. 11, Merkel said: “We will soon send out invitations for a conference in Berlin.”


German Chancellor Angela Merkel said Libyan peace talks will be held in Berlin, a day before the warring factions in the north African nation announced a ceasefire.

“We hope that the joint efforts by Russia and Turkey will lead to success, and we will soon send out invitations for a conference in Berlin,” Merkel said on Jan. 11 during a joint press conference with Russian President Vladimir Putin in Moscow.

She stressed that the United Nations would lead talks if a meeting were to take place in Berlin, and that Libya’s warring parties would need to play a major role to help find a solution.

The aim was to give Libya the chance to become a sovereign and peaceful country, Merkel said.

Putin expressed support for the process, saying it was a “timely” idea and necessary to bring the conflict in Libya to an end.

The comments came days after Turkey and Russia urged Libya’s warring parties to declare a ceasefire.

“The condition is the withdrawal of the attacking party, which does not seem willing to do so,” he said after holding talks with Italian Prime Minister Giuseppe Conte in Rome on Jan. 11.

Libyan forces loyal to eastern-based commander Khalifa Haftar said this week they had taken control of the strategic coastal city of Sirte in a rapid advance preceded by air strikes.

Haftar’s self-styled Libyan National Army was also considered responsible for a deadly drone attack on a military academy in the capital Tripoli.

Conte said on Jan. 11 he expressed his “consternation” to General Haftar for the January 4 attack in Tripoli, after meeting him in Rome earlier this week.

“We are working hard as a government for the immediate goal of a ceasefire and to steer the conflict towards a political solution,” Conte said.

Turkey backs al-Serraj’s Tripoli-based Government of National Accord and has said it will send military advisers and possibly troops to reinforce its support, while Russian military contractors have been deployed alongside General Haftar.