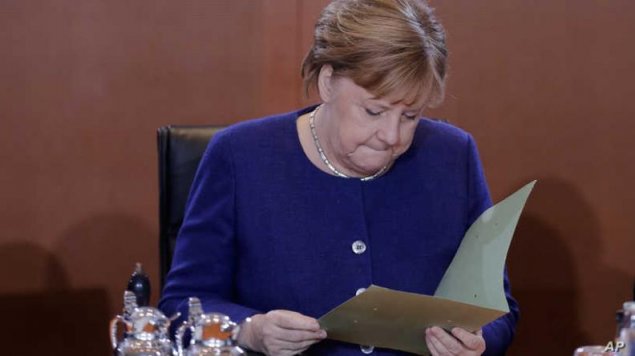 German Chancellor Angela Merkel is due to travel to Moscow Saturday for talks with Russian President Vladimir Putin. The meeting will likely focus on the Iran crisis, with both Germany and Russia calling for de-escalation following the U.S. targeted killing of Iranian General Qassem Soleimani and the retaliatory airstrikes by Tehran on Western military bases in Iraq.

The Ukraine conflict is also on the agenda, alongside the future of the Nord Stream 2 gas pipeline running from Russia to Germany, amid strong opposition from the United States.

Putin will host Merkel shortly after returning from a trip to the Middle East this week. The Russian president made a rare trip to Damascus, Syria Tuesday, only his second visit since Russia intervened in 2015 to aid President Bashar al-Assad in Syria's civil war. Iran and its proxies have also provided significant support to Assad’s forces.

With its growing entanglement in Middle Eastern affairs, Russia is trying to avert the outbreak of a new conflict in Iran, says analyst Andrew Foxall of policy analyst group The Henry Jackson Society.“

Iran presents President Putin with the opportunity to present himself as a peacemaker rather than a ‘peace-breaker,’” Foxall says. “And in that sense his interests are very firmly aligned with Chancellor Merkel as they both believe in the JCPOA (the 2015 Iran nuclear deal); they both believe that discussion and debate are far more preferable than the conflict and confrontation that is currently taking place between Tehran and Washington.”

Europe and Russia are trying to keep the JCPOA alive. President Donald Trump pulled the U.S. out of the deal in 2018, and says the agreement is effectively dead.“

The time has come for the United Kingdom, Germany, France, Russia, and China to recognize this reality,” President Trump said Wednesday. “They must now break away from the remnants of the Iran deal.”

The U.S. and Germany also disagree sharply on Nord Stream 2, the gas pipeline under construction from Russia to Germany beneath the Baltic Sea. Washington has imposed sanctions on companies involved in the project, to the dismay of Berlin and Moscow.

“Nord Stream 2 is designed to drive a single-source gas artery deep into Europe, and a stake through the heart of European stability and security,” then-U.S. Energy Secretary Rick Perry said during a trip to Lithuania in October. “It would increase Russia's leverage over Europe's foreign policy and Europe's vulnerability to a supply disruption,” he added.

Ukraine is the traditional hub for the transit of Russian gas to Europe and risks losing valuable transit fees. The project has strategic as well as economic value for Russia, argues analyst Foxall.“

What Russia has sought to do over the past few years, if not longer, is drive a wedge in the transatlantic relationship using any tool or instrument that it can identify and Nord Stream 2 does provide Russia with precisely that sort of tool. Nord Stream 2 will undoubtedly be discussed in Moscow and will provide an opportunity for both Merkel and Putin to re-commit themselves to the project and again to argue that it does not undermine European energy security,” Foxall told VOA.

The EU imposed sanctions on Russia following the 2014 forceful annexation of Crimea and invasion of eastern Ukraine. Some European states, including Italy and Hungary, are pushing for an end to the sanctions. “If he is going to find a weak link from the European Union, it seems to me unlikely that that will be Germany and Chancellor Merkel, who has been at the forefront of arguing for those sanctions,” notes Foxall.

Ukrainian President Volodymyr Zelenskiy has taken a different line with Moscow to the more hawkish approach of his predecessor, Petro Poroshenko, agreeing to a series of prisoner exchanges in recent weeks. Germany’s Merkel has offered strong support and Europe hopes it may be the first step in a wider deal to end the Ukraine conflict.

With tensions higher than at any time since the Cold War, her meeting with Putin will be watched closely for any hint of change in East-West relations.