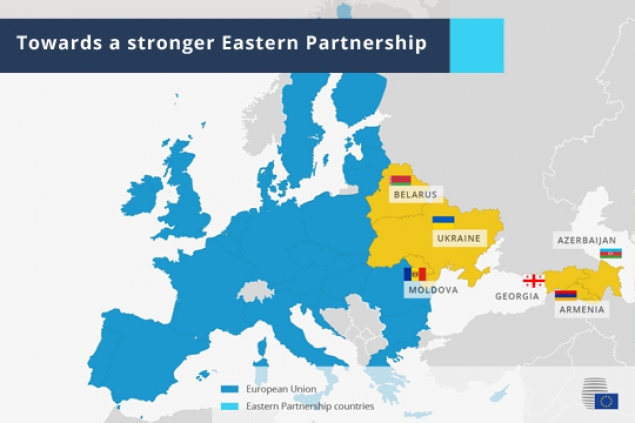 The scenarios for Eastern Partnership 2030 examine the different trajectories that the Republic of Moldova could take in the next decade. The scenarios reveal that inertia will not bring to any preferred outcomes for Moldova.

The Eastern Partnership as a regional framework for the Eastern Neighborhood is one of the most successful initiatives that have brought positive dynamic transformations in the wider region.


Moldova has essentially changed over the past decade due to the excellent EaP platform, building a sustainable network between the EU and the partner countries.

The collective efforts have brought considerable benefits including to Moldovan citizens in different areas.


What lessons can be drawn?

The future context of the EaP countries development depends on the quality of lessons learned during the last ten years and capabilities to resist challenges that lay ahead. Eastern European Futures: Scenarios for the Eastern Partnership 2030 reflects the possible ways of changes, based on the narratives of global politics transformation.

Therefore, the country-specific scenarios were elaborated according to the above-mentioned set-ups and aimed to enhance the usefulness of scenario narratives through political and socio-economic development paths.

Moldova’s future within these scenarios is defined by the main tendencies based on the situation on the ground.

Also, found on the identification of major driving forces that represent key factors and process that influence the subsequent development and building images of the future, taking into account the specifics of the links between driving forces: political, institutional, economic, social, cultural, technological, educational and demographic.

The Pragmatic Integration scenario for Moldova assumes no essential change in terms of geopolitical tensions and general domestic policy’s parameters, except for the continued implementation of the Association Agreement and DCFTA with EU, improvement of the foreign trade performance and progression of economic development, especially the agricultural and agri-food sector.

This scenario is based on the realistic view of Moldova’s future and can be regarded as an illustration of pragmatic integration and concentration on the economic interdependence between the EaP countries.

Russian Hegemony Revisited – this scenario suggests the strengthening of Russian influence in Moldova. A lack of good governance, transparency and low level of democracy, including increased corruption at all levels and a high dependence on major foreign actors’ policy, lead towards the subversion of Moldova’s sovereignty and territorial integrity. The settlement of the Transnistrian conflict is artificially prolonged.

At the same time, the high concentration of state power in the narrow political interests of a small oligarchic group affects the entire economic, political and social development of the country.

Subsequently, the Moldovan citizens continue to leave the country in search of a better life and the population is clearly reducing, while the country is losing its main workforces. In a zero-sum process, Moldova comes under pressure, with destructive tendencies within domestic development and governance.

This is the most pessimistic scenario for Moldova, which reflects the possible way of long-term stagnation with dire consequences.

The EU Pivot to Moscow scenario illustrates the situation when many within Moldova’s political class are supportive of partnering with Russia and new parties emerge which take a pragmatic approach towards the changed external situation. While there is some optimism about closer economic cooperation, Moldova’s main political and socio-economic problems continue to prevail.

Moldova’s dependence on Russian energy resources represents an obvious internal vulnerability of the state. In the framework of this is not the worst-case scenario, but instability remains the central issue.

At the same time, this scenario can be understood as a plausible description of a possible Moldova’s future. This is an alternative image of the choice of Moldovan development we face today.

Civic Emancipation – this scenario develops practical foresight by identifying the general trends as a result of the growth of the activism and reformist sentiments of civil society. There is an understanding that the ability to change the political situation in the country directly depends on the level of political literacy of the population.

More attention is focused on education, strengthening the civic position of the younger generation and activism of civil society. Electoral literacy is improving. The legal foundation of the democratic state is gradually being strengthened in Moldova.

Meanwhile, the country maintains an apparent neutral position in terms of foreign policy. The scenario is more oriented on the consolidation of youth through education and raising the active civic position among the young generation, which might change the pessimistic view of the country’s future.