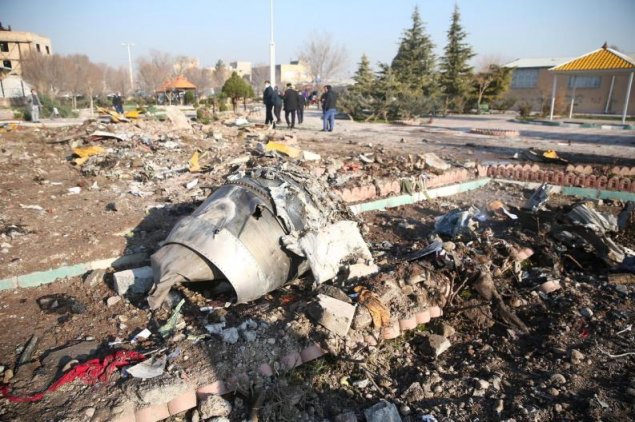 Iran has admitted that its military made an “unforgivable mistake” in unintentionally shooting down a Ukrainian jetliner, killing all 176 people onboard, after days of rejecting western intelligence reports that pointed to Tehran being responsible.

A military statement on Saturday morning via state TV blamed “human error” for the downing of Ukraine International Airlines flight 752 on Wednesday in the tense aftermath of strikes on US targets. It was followed by an apology from Iran’s president.

Ukraine’s President Volodymyr Zelenskiy responded on Saturday morning that Iran must make an official apology and agree to full investigation and compensation, as well as co-operating with Ukraine’s own investigators. “Our 45 professionals should have full access and co-operation to establish justice.”

Hassan Rouhani, the Iranian president, wrote on Saturday: “The Islamic Republic of Iran deeply regrets this disastrous mistake. My thoughts and prayers go to all the mourning families. I offer my sincerest condolences.”

The Iranian foreign minister, Javad Zarif, wrote: “A sad day. Preliminary conclusions of internal investigation by armed forces: human error at time of crisis caused by US adventurism led to disaster. Our profound regrets, apologies and condolences to our people, to the families of all victims, and to other affected nations.”

The plane was mistaken for a hostile target after it turned towards a sensitive military centre of the Revolutionary Guard, the military statement carried on the offical IRNA news agency said.

“The military was at its highest level of readiness” amid the heightened tensions with the US, it said, adding: “In such a condition, because of human error and in a unintentional way, the flight was hit.”

The military apologised for the disaster and said it would upgrade its systems to prevent such mistakes in the future. The responsible parties would be referred to a judicial department within the military and held accountable, it said.

Iran’s acknowledgement of responsibility was likely to renew questions of why authorities did not shut down the country’s main international airport and its airspace after the ballistic missile attack, when they feared US reprisals.

It also undermines the credibility of information provided by senior Iranian officials so far. As recently as Friday, Ali Abedzadeh, the head of the national aviation department, told reporters with certainty that a missile had not caused the crash, while on Thursday, cabinet spokesman Ali Rabiei dismissed reports of a missile, saying they rub salt on a painful wound for families of the victims.

Zelenskiy, the Ukrainian president, said: “Even before the termination of the International Commission, Iran has pleaded guilty to crashing the Ukrainian plane. But we insist on full admission of guilt. We expect from Iran assurances of readiness for full and open investigation, bringing those responsible to justice, returning the bodies of the dead, payment of compensation, official apologies through diplomatic channels.”

The jetliner, a Boeing 737, went down on the outskirts of Tehran during takeoff a few hours after Iran had launched a barrage of missiles at US forces in Iraq in the early hours of Wednesday.

The strikes on two US bases were retaliation for the US drone strike that killed the powerful Quds Force leader Qassem Suleimani in Baghdad on 3 January – the culmination of a recent series of tit-for-tat attacks that threatened to push Washington and Tehran into war.

Iran’s acknowledgement of responsibility for the crash was likely to inflame public sentiment against authorities after Iranians had rallied around their leaders in the wake of Suleimani’s killing. The general was seen as a national icon and hundreds of thousands of Iranians had turned out for funeral processions across the country.

But the vast majority of the plane victims were Iranians or Iranian-Canadians, and the crash came a few weeks after authorities quashed nationwide protests ignited by a hike in fuel prices.

“This is the right step for the Iranian government to admit responsibility, and it gives people a step toward closure with this admission,” said Payman Parseyan, a prominent Iranian-Canadian in western Canada who lost a number of friends in the crash.

“I think the investigation would have disclosed it whether they admitted it or not. This will give them an opportunity to save face.”

Iran had denied for several days that missiles could have downed the aircraft and instead blamed mechanical malfunction.

Western security officials began briefing on Thursday afternoon that intelligence suggested the plane had been accidentally shot down by two surface-to-air missiles fired by the Iranian military.

A preliminary report released by Iran’s civil aviation authority the day after the crash found that the pilots of the doomed plane did not make radio contact but had attempted to turn back to the airport before the plane went down.

Air crash experts have raised serious concerns since the accident over the handling of the crash site, such as the removal of debris, sparking fears that Tehran has sought to eliminate evidence from the area.

Iran has invited investigators from Canada, Ukraine and Boeing to visit the accident site on the outskirts of Tehran and said it would also welcome representatives of other countries whose citizens died on the flight.

The plane, en route to the Ukrainian capital of Kyiv, was carrying 167 passengers and nine crew members from several countries, including 82 Iranians, at least 57 Canadians, 11 Ukrainians and three Britons.

Iran had said on Thursday it would download the information from voice and flight data recorders, known as black boxes, to determine what had happened, although it said the process could take one to two months.

The Ukrainian foreign minister, Vadym Prystaiko, said on Friday that Kyiv had been given access to the flight recorders and planned to start analysing their content.

Experts said mounting international scrutiny would have made it all but impossible to hide signs of a missile strike during any investigation and Tehran may have felt it best to make a swift policy reversal than battle rising criticism abroad.