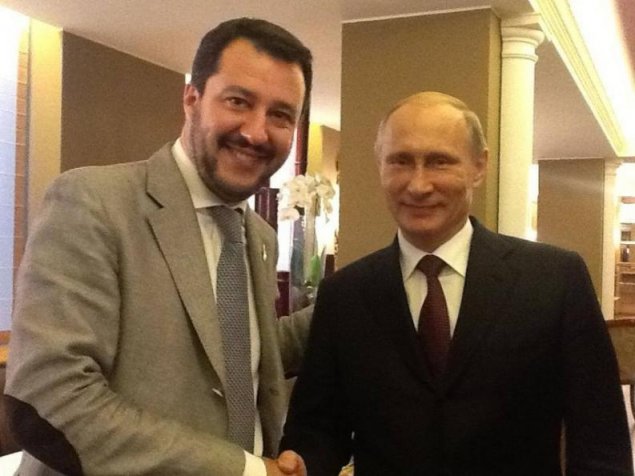 ITALY's Matteo Salvini was hit by protests in the Italian Parliament as officials savaged the deputy Prime Minister following allegations of a secret oil deal with Russia.

In a video obtained by Buzzfeed, Gianluca Savoini, an aide to Mr Salvini was caught discussing a potential deal in the Metropol Hotel in Moscow last October. Following the release of the video and transcript, the Italian Parliament descended into chaos on Wednesday as politicians held up signs reading “65” in reference to the $65million (£51million) the party would have received. Mr Savoini was recorded discussing the deal with Italian and Russian associates which would've secretly channelled Russian money into Mr Salvini’s supposedly far-right Lega Party.

Following the protest, two former Prime Minister’s have called for an inquiry into the allegations.

Hitting out Mr Salvini’s party, former Prime Minister, Matteo Renzi told Buzzfeed that he would be calling for an investigation into the claims.

In a tweet, Mr Renzi called on Mr Salvini “to clarify” the accusations in the case.

Mr Renzi's successor, Paolo Gentiloni supported this and labelled the report from Buzzfeed as anything but “gossip”.

He added: “BuzzFeed’s investigation is not gossip.

"I believe that given the importance of the accusations brought forward and the investigative work carried out, Salvini cannot pretend that nothing has happened and must answer urgently.”

The “65” signs were also accompanied with signs reading “49” a reference to the public funds the Lega party was charged with embezzling between 2008 and 2010 and has been sentenced to repay.

In the full transcription published by Buzzfeed, the men proposed an agreement whereby the Lega party would be directly funded and sustain its election campaign.