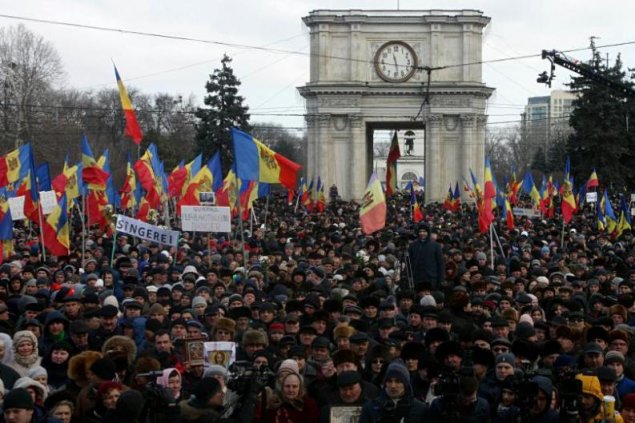 People attend a rally in front of the Parliament building in Chisinau, Moldova, Jan. 24, 2016. Some 40,000 opposition demonstrators took to the streets of the capital calling for early elections amid a political crisis.

On the surface, huge anti-government demonstrations in Moldova, the poorest country in Europe, are mirroring recent events in Ukraine when violent standoffs in the capital, and then in the country’s south and east, were defined by allegiance to either Moscow or the European Union.

But things in this former Soviet republic are more complicated.

“What we’re seeing is a state collapse and an economic collapse,” contends Balázs Jarábik, a visiting scholar at the Carnegie Endowment for International Peace, who specializes on Eastern Europe. “It could turn violent, and there are a lot of weapons around.”

Mass protests in Moldova flared up earlier this month when a new prime minister, Pavel Filip, was suddenly sworn in at midnight — following months of political deadlock — without any media presence, triggering an attempt by demonstrators to storm the parliament building.

A subsequent deadline imposed by the opposition — a loose coalition of both pro-Russian and pro-EU groups — for the dissolution of the government and fresh elections is set to expire Thursday evening. If their demands are not met, the protesters threaten to bring tens of thousands of people out onto the streets of the Moldovan capital, Chisinau, and begin a campaign of civil disobedience.

Filip has upped his rhetoric ahead of the ultimatum. “The political class now has its last chance to restore Moldovans’ and our international partners’ trust,” Filip told the BBC in an interview earlier this week. “Your freedom to swing your fist ends at my nose… Any action by protesters that could be considered a violation of the law will be punished.”