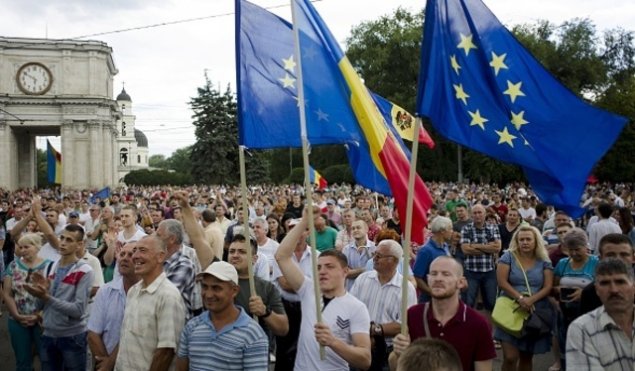 To understand how Russian President Vladimir Putin may get his way in Ukraine without having to continue the war there, watch its neighbor, Moldova.

Moldova has had a Russian-controlled frozen conflict zone since 1992. Like Ukraine, it has a torn identity, with even the Romanian-speaking majority divided on whether to consider themselves Romanian or Moldovan. And like Ukraine, its political system is corrupt.

Last week, the chief prosecutor in this small agricultural nation had former Prime Minister Vlad Filat marched out of parliament by men in black ski masks. Filat was questioned in connection with a $1 billion bank fraud.

Ever since a preliminary report on the fraud by corporate investigation firm Kroll became public earlier this year, crowds have camped out in the streets to protest the government's apparent failure to prosecute. They're mad about the country's endemic corruption and aren't going to take it anymore.

A sum worth an eighth of the country's gross domestic product appears to have vanished in the fraud. The heist was revealed in November 2014, yet the banks weren't liquidated as the International Monetary Fund has demanded. The cost has fallen on taxpayers in Europe's poorest country.

When the supposed investigation first started, all the bank documents related to the only man named in the Kroll report, Ilan Shor, were loaded into a van to be driven to safekeeping. The van was promptly "stolen" and found burned, together with the evidence. Shor is free (as he happily pointed out at the time, there was no documentary evidence against him) and was just elected mayor of a town near the capital.

It is on Shor's testimony, and (unburned) bank documents he says he has provided to prosecutors, that the allegations against Filat are based. Shor says Filat blackmailed him into paying $260 million in bribes, and that it was to generate this cash that Shor produced a carousel of loans paid off by other unsecured loans from a trio of colluding banks. Even if true -- and Filat denies the charges -- that leaves an additional three-quarters of a billion dollars unaccounted for.

The crowd of protesters, organized by a group called Dignity and Truth, supports integration with the European Union, as do most Moldovans. But unlike in Ukraine's two pro-democracy revolutions, and the 2009 "Twitter revolution" that brought Filat to power in Moldova, the government under attack is now pro-European, not pro-Russian or communist. If the protests produced new elections tomorrow, pro-Russian parties would very probably win.

If Ukraine continues to fail in dealing with corruption, and its current government is discredited, the same is likely to happen there: Pro-European parties would be thrown out and others even less committed to EU integration would take power. Whether those are from the far right or are more friendly to Russia, it would suit Putin's purposes by damaging Ukraine's prospects of binding itself to Europe.

The problem for Dignity and Truth is that reforms aimed at ending corruption are in the interests of neither the businessmen who run Moldova's pro-European parties nor the pro-Russian alternatives. And there is no viable political force representing clean government to take over.

Filat made money from political power. But he also oversaw Moldova's signature of a trade and association pact with the EU, as well as a deal for Moldovans to travel visa-free in Europe. This is why all of the fury of the pro-Russian parties, which have been holding their own smaller, but more aggressive protests, has been focused on destroying him.

Moldova's richest oligarch, Vladimir Plahotniuc, commands the second party in the ruling coalition, and his ministers and appointees control the country's justice system, so the investigation into Filat has gone forward with Plahotniuc's assent. He has resigned his seat in parliament to appease popular anger, but that doesn't mean he has necessarily lost his grip on the country's institutions, that democracy will suddenly flower or that corruption will be rooted out.

Moldova has been fundamentally corrupted by its leaders and a fire hose of Russian money. According to Kroll's report, the seed money for the bank fraud came from banks in Russia. And last year, a report by a nonprofit group forced prosecutors to start investigating an operation that allegedly laundered as much as $20 billion from 19 Russian banks, from 2010 to 2014. That's more than twice Moldova's annual GDP.

Moldova has seen its currency devalued by 25 percent since late last year. It is under a Russian trade embargo, its coffers are empty, and the reforms it is being asked to implement by the IMF and the EU involve sharply raising utility bills and reducing state spending. This is a recipe for the collapse of a discredited government.

The ruling coalition may well limp on until spring, because by law no snap election can be held until then. If that happens, even the optimists among Western diplomats think the pro-Russian parties would win. They would likely perpetuate Moldova's systemic corruption, though with a changed cast of beneficiaries.

Leaders of the pro-Russian parties also say they would seek to revoke Moldova's agreement with the EU, join Putin's alternative Eurasian Union and turn to the Kremlin for financing instead of the IMF. That might not suit most Moldovans, and more of the young and talented would leave. For Russia's leaders, however, it would mean success.