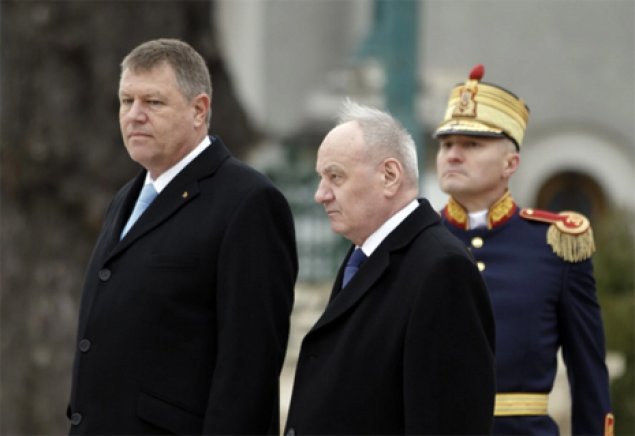 Romania’s president urged Moldova on Wednesday to reform its justice and banking systems so the government can get a $65 million loan that Moldova needs to prevent an economic collapse.

President Klaus Iohannis said he did not know how long it would take Moldova, a close ally, to fulfil the terms of the loan being offered by the Romanian government, which has demanded that Moldova fight corruption, sign a draft agreement for a loan from the International Monetary Fund and appoint a central bank governor to get the money.

“We are waiting for the first very concrete steps,” said Iohannis. “I think the (Moldovan) government has every interest in rapidly starting these reforms, but we can’t know whether it will take a month, three or six. We decided to give Moldova humanitarian aid ... to help people there.”


Moldova is one of Europe’s poorest countries, with an average monthly salary of just 220 euros ($245). The country has been hit by months of protests and political instability following the disappearance of more than $1 billion from three Moldovan banks prior to the November 2014 parliamentary election. Protesters are demanding a transparent probe into the missing money and a new election.

“We talked about political, geopolitical and economic risks. Avoiding them would place Moldova in a stable European space,” Timofti said.

Moldova, a former Soviet republic, signed a trade and political association agreement with the European Union in 2014, something Russia opposes.

Copyright 2016 The Associated Press. All rights reserved. This material may not be published, broadcast, rewritten or redistributed.