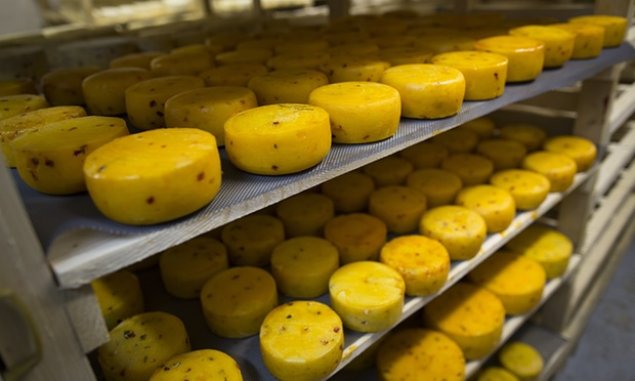 Russia’s interior ministry has announced the unmasking of a major criminal gang involved in the newly illegal cheese trade, after the police and security services made a number of coordinated arrests and warehouse searches near Moscow.

Elena Alekseyeva, from the ministry, said on Tuesday: “An organised international criminal group has been uncovered, which was engaging in the distribution of sanctioned products from abroad.”


Moscow banned the import of cheese and a number of other food products from EU countries a year ago in response to western sanctions on Russia over its actions in Ukraine. The move was meant to hit the economies of EU countries, but it has also led to rising prices in Russia.

In an acknowledgement that the bans were being frequently circumvented, officials in recent weeks have begun the high-profile destruction of contraband food, destroying Dutch cheese, Polish apples and Danish pork at the border by incineration or crushing. Many Russians were uneasy at the images, shown widely on state television, of food being destroyed in a country where millions live below the poverty line.


Congealed Tipp-Ex to odour of gym – Russia's cheese fakers fail the taste test
Read more
Over the weekend, food standards officials said about 600 tonnes of food had been destroyed since the new “destroy on site” rules came into effect on 6 August. A hotline has been set up for concerned citizens to anonymously report sightings of contraband cheese and other products.

The scheme appears to be more sophisticated than simply importing banned cheese and selling it on. The interior ministry statement suggested the group had been importing rennet or other food products used to make cheese, which are also banned under the sanctions. They would then produce cheap counterfeit cheeses on site, add fake labels and pass them off as banned European luxuries.

The various counter-sanctions have led to a number of surreal news items in recent days. In a small town in Tatarstan, police and prosecutors released a video of three frozen geese of suspect origin being seized with high ceremony from a local shop, taken to a field and driven over with a bulldozer. At the border with Ukraine, 50 live ducklings were seized, euthanised and incinerated, according to news reports.

Separately, customs officers have begun burning shipments of Dutch flowers, claiming dangerous parasites had been found in some of them.
theguardian.com