Russians Are Getting Sick of Church 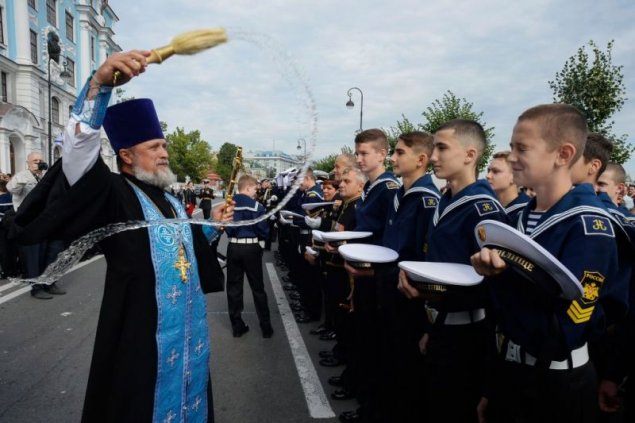 Orthodox Christianity—and Vladimir Putin—are at the center of the country’s newest culture war.

An extraordinary protest unfolded in Russia’s fourth-largest city, Yekaterinburg, in recent weeks. Large crowds of locals gathered to demonstrate against plans to construct a big new church in a park in the center of the city. And despite facing intimidation, arrests, and the disapproval of both regional and federal politicians, not to mention the huge authority of the Russian Orthodox Church, the protesters prevailed.

The local governor, Yevgeny Kuyvashev, agreed in late May for the construction site to be moved after an opinion poll showed that 74 percent of city residents were opposed to the plans. President Vladimir Putin had said he would approve the verdict of a referendum—though he evidently did not expect the resulting vote, which was heavily against the construction of the church.

It was just the latest sign that times have suddenly changed in Russia when it comes to matters of church and society. A recent opinion poll recorded that 79 percent of Russians think of themselves as Orthodox Christians. But the church does not command obedience. The Yekaterinburg protests were much angrier, the views of the protesters much more passionately held, than the other big recent social protest in Russia’s regions against a planned landfill site in the northern city of Arkhangelsk.

Thirty years ago, at the end of the Soviet era, it would have been unthinkable—an anathema—for the public to protest against the construction of a church. After all, in living memory thousands of places of worship had been bulldozed by the Soviet authorities, and priests has been thrown in jail or executed.

The mood of change of the perestroika epoch and the sense of a reckoning with the Communist Party were summed up in a line at the end of one of the defining movies of the time, Repentance, directed by the Georgian filmmaker Tengiz Abuladze and released in 1987, winning the Grand Prix of the Cannes Film Festival the same year. An old woman asks a stranger if she is taking the right road to the church. The stranger replies in the negative, and the old woman asks, “What good is a road if it doesn’t lead to a church?”

The line summed up the consensus that the road to a church was the same as the road to freedom and prosperity—that when Soviet citizens aspired for their country to have the consumer goods, books, films, and music enjoyed by Europe and the United States but forbidden, open churches were one more important category on that list. In those countries, churches were open and free to visit, unlike in the Soviet Union, where they were shuttered and ruined.

So the late Soviet intelligentsia, battling against Communist rule, found common cause with traditional religious believers in demanding freedom of religion alongside freedom of speech and freedom of assembly. It was perfectly normal to be both liberal and religious. To open a new church, if that was possible, was to hammer one more nail into the coffin of Soviet power.

The protest culture of the time was imbued with religious images. Cultural figures revered poets from Russia’s Silver Age such as Osip Mandelstam and Boris Pasternak who had been believers and wrote spiritual verse about the exaltation of going to church services. At the same time, the nature of churchgoing in Russia radically changed. Formerly almost exclusively the preserve of old people, most of them women, the churches now opened their doors in the 1990s to a new generation of young people, with a nonconformist outlook.

For many young people of that epoch, taking part in church services, fasting, and praying at home was an act of generational nonconformism, a protest against the official atheism of their parents.

Slowly, however, the new romance between church and protest went sour. Russia’s church authorities did not engage its new parishioners in serious conversation about the modern world. Instead, they talked to them with the same didactic tone as the old ladies, telling them about their formal requirements to light candles before the church icons in a certain way, how to dress, and how to observe all the Orthodox fasts properly. Sunday schools, icon workshops, and choirs were formed.

But there was no serious discussion, and the big topics remained unaddressed. There was no debate about the language and meaning of the liturgy, the relevance and mission of the church in the modern world, or greater participation of the laity in the services. The new Christians wanted the church to disavow the power and wealth of the state and remain the friend of the oppressed.

In the new millennium, with Russia ruled by Putin, church and state have deepened the symbiotic relationship they had in tsarist times. The backlash has been inevitable. The gilded Cathedral of Christ the Savior had been replaced in Soviet times by Moscow’s biggest swimming pool, named Moskva. The cathedral evokes such mixed feelings in a new generation of urban intellectuals in the city that there has been serious online approval for the thought that it would be nice to have the Soviet swimming pool back.

In one sense, the Yekaterinburg protest was against the way the old-fashioned Orthodox Church has fused with the Putin regime and taken dirty money to finance itself. But it goes deeper than that. The demonstrations are in some ways a manifestation of a newborn secular cultural and political outlook reminiscent of Western Europe. They are a rejection of the church as archaic not just because it collaborates with the state but as archaic in and of itself.

For the youngest Russians who have gotten used to online communities and virtual communication, the church’s stone buildings offer very little they can relate to. They promise little to those urban progressives who are interested in veganism and gender equality, and are riding the wave of the anti-sexual harassment #MeToo movement.

The events in Yekaterinburg show that the direct link between liberalism and spirituality that dates back to Soviet times has finally been broken. From now on, most Russian liberals will be officially against the church, and Russian conservatives will support it. This may even shape party politics in the future. If Russian politics ever opens up, it could see the emergence of a Social Democratic Party and a Christian Democrat Party, as in Germany, and the divides between Democrats and Republicans in the United States over abortion and same-sex marriage. The West’s culture war may have arrived in Russia.

Alexander Baunov
senior fellow at the Carnegie Moscow Center and editor in chief of Carnegie.ru