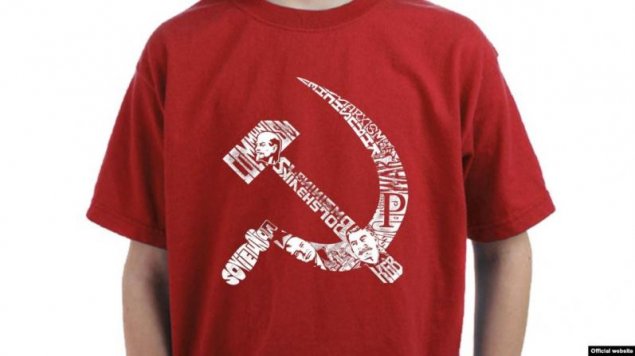 Lithuania has urged American online retailer Amazon to stop selling clothing featuring the hammer and sickle and other Soviet symbols, which it says are offensive to victims of Soviet-era persecution.


"While cruelty is growing across our planet, nobody should stay indifferent even to 'funny' symbols," the Baltic country's first postindependence president, Vytautas Landsbergis, said in an open letter to Amazon founder Jeff Bezos.

The 86-year-old equated Soviet-themed symbols to "communist tyranny," while calling the U.S.S.R. a collaborator with Nazi Germany in "war crimes and genocide."

Landsbergis's letter comes on the eve of the 80th anniversary of the Molotov-Ribbentrop Pact, in which Nazi Germany and the Soviet Union agreed to divide up Central and Eastern Europe.

This cleared the way for the 1940 Soviet invasion that folded Lithuania and the other Baltic states of Estonia and Latvia into the U.S.S.R.

Tens of thousands of Lithuanians, Estonians, and Latvians were executed or exiled to Siberia through the following decades of Soviet occupation.

The hammer-and-sickle symbol is banned in Lithuania, a nation of 2.9 million that was the first republic to secede from the Soviet Union as it began to disintegrate in 1990, and has since become a European Union and NATO member.

Walmart has promised Lithuania's ambassador to Washington to stop selling clothing with the hammer and sickle, the country's Foreign Ministry told AFP.

However, a sleeveless shirt was being offered on Walmart's online store for $14.97 on August 22.

In May 2018, German sporting-goods maker Adidas agreed to remove a red tank top with the letters U.S.S.R. and emblems of the Soviet Union from its online store. The item was being sold ahead of the soccer World Cup in Russia.