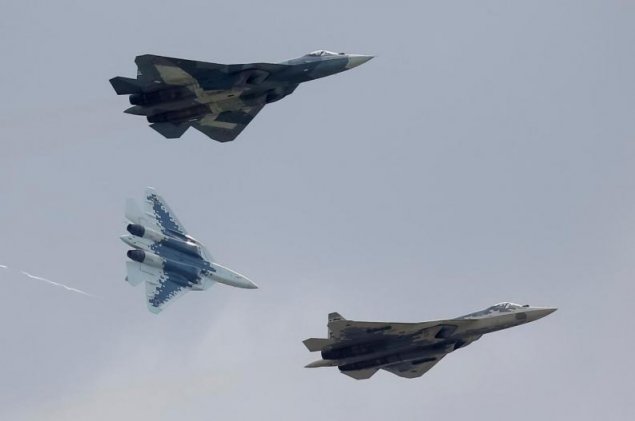 In July 2019, Russia announced a major purchase of its fifth-generation stealth air superiority fighter, the Su-57.


As the order is only for seventy-six aircraft by 2028, some are skeptical of whether this is true “mass production” for the Su-57, given the constant delays and revisions in the program. Recent Western competitors to the Su-57 like the F-35 have been produced in the hundreds. But a look at contemporary Russian aircraft production and procurement, as well as the Soviet Su-27 program suggests that this order of 76 aircraft may be just the first step that could be ramped up significantly in the near future.

The Su-57 in many ways is the successor to the Su-27, a premier air superiority fighter meant to fight the best fighters an enemy might present. As a result, it’s packed to the brim with the best technology Russia’s aerospace can offer: powerful engines, advanced maneuverability features, and top-of-the-line avionics including an AESA radar.

All of these technologies are costly to develop, so the fighter that incorporates them will need to be a highly refined design that can serve for decades, as the Su-27 did. The Su-27 program took nearly fifteen years to reach design maturity. The long process was due to various aerodynamic redesigns of the airframe. As the Su-57 went through several iterations of its airframe as well, the project is following roughly the same trajectory as the Su-27.

But when the design was finalized, Su-27s were produced at the rate of over sixty a year during the first few years of production. By the start of the 1990s, over one hundred were in service. But Russia’s plans to procure the Su-57 don’t appear to follow the same plan of rapidly ramping up once the design is “finalized”: at seventy-six aircraft by 2028, that comes out to slightly less than nine aircraft per year, a stark change from the Su-27’s production rate.

However, while Russia’s defense budget is large by contemporary standards, it’s merely a shadow of Soviet defense spending. While the Soviet Union could afford to procure hundreds of Su-27s within the period of a few years, Russia cannot. The F-35 gets its large number of purchases from production for foreign militaries, and the consistently high level of spending on the military the United States always has.

When one squares the Su-57 order with those for other contemporary Russian fighters, the numbers make sense. For example, the Su-30SM received a contract for sixty jets in 2011, and seventy-five jets in 2015, numbers in line with the Su-57’s seventy-six jets. The smaller number of jets in each order allows the Russian Ministry of Defense more flexibility to cut or increase future numbers of fighters in accordance with changes in budgets or Russian economic performance, instead of being locked into a single large buy like those preferred in the West or the Soviet Union.

However, deliveries of the Su-57 will take place at a slower pace than the production of other Flanker variants. This is likely due to the need to create new tooling, processes, and technologies to streamline the Su-57 manufacturing process, as it is Russia’s first true “stealth fighter.” Once these elements are in place and if the Su-57’s is liked by the units set to receive them, Russia might upgrade the seventy-six plane order.

But for that to happen, it’s probably necessary for the Su-57 to find a foreign buyer. The Russian Ministry of Defense is playing a balancing act as many expensive “next generation” weapon systems in development, and a foreign buyer would probably be critical to driving down the cost of the Su-57 during the seventy-six aircraft run.

Indeed, the run may be stretched out over more years than necessary to allow Russia to find a foreign buyer, so later aircraft in the run can be procured at a cheaper cost for the Russian military. Either way, the seventy-six aircraft buy of the Su-57 should not be scoffed at. While it might not match up to Soviet numbers, it fits within the pattern of recent Russian aerospace procurement contracts.


Charlie Gao studied Political and Computer Science at Grinnell College and is a frequent commentator on defense and national security issues. This article originally appeared in August.