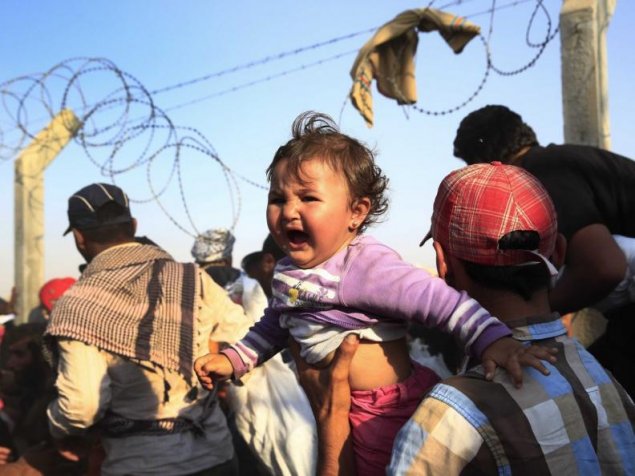 The United Nation’s refugee agency recently released its annual report on people displaced by war around the world, and the news is bad:

The number of people forcibly displaced at the end of 2014 had risen to a staggering 59.5 million compared to 51.2 million a year earlier and 37.5 million a decade ago.

The increase represents the biggest leap ever seen in a single year. Moreover, the report said the situation was likely to worsen still further. The report focuses on raw estimates of displaced persons, but I think it makes more sense to look at this group as a share of world population. The number of people on the planet has increased by more than half a billion in the past decade, so we might expect to see some growth in the number of forcibly displaced persons even if the amount of conflict worldwide had held steady.


The chart below plots annual totals from the UNHCR report as a share of mid-year world population, as estimated by the US Census Bureau.

The number of observations in this time series is too small to use Bayesian change point detection to estimate the likelihood that the upturn after 2012 marks a change in the underlying data-generating process. I’m not sure we need that kind of firepower, though.

After holding more or less steady for at least six years, the share of world population forcibly displaced by war has increased by more than 50 percent in just two years, from about one of every 200 people to one of every 133 people. Equally important, reports from field workers indicate that this problem only continues to grow in 2015.

I don’t think I would call this upturn a “paradigm change,” as UN High Commissioner for Refugees António Guterres did. But there is little doubt that the problem of displacement by war has worsened significantly since 2012.

Unfortunately, it’s impossible to say for sure. The time series in the UNHCR report only starts in 2004, and a note warns that methodological changes in 2007 render the data before that year incomparable to the more recent estimates.

The UNHCR describes the 2014 figure as “the highest level ever recorded.” That’s technically true but not very informative since recording started only recently. A longer time series assembled by the Center for Systemic Peace (here) supports the claim that the latest raw estimate is the largest ever. But as a share of world population, it’s probably still a bit lower than the levels seen in the post–Cold War tumult of the early 1990s (see here).

Other relevant data affirm the view that, while clearly worsening, the intensity of armed conflict around the world is not at historically high levels, not even for the past few decades. Here is a plot of annual counts of battle-related deaths (low, high, and best estimates) according to the latest edition of UCDP’s data set on that topic (here), which covers the period 1989–2013.

Note that these figures have not been adjusted for changes in world population.

We see a similar pattern in the Center for Systemic Peace’s Major Episodes of Political Violence data set (second row here), which covers the whole post-WWII period. For the chart below, I have separately summed the data set’s scalar measure of conflict intensity for two types of conflict, civil and interstate (see the codebook for details).

Like the UCDP data, these figures show a local increase in the past few years that nevertheless remains well below the prior peak, which came when the Soviet Union fell apart.

I’ll wrap this up by pinning a note in something I see when comparing the shorter-term UCDP estimates to the UNHCR estimates on forcibly displaced persons: adjusting for population, it looks like armed conflicts may be killing fewer but displacing more than they used to.

That impression is bolstered by a glance at UCDP data on trends in deaths from “intentional attacks on civilians by governments and formally organized armed groups,” which UCDP calls “one-sided violence” (here).

As the plot below shows, the recent upsurge in warfare has not yet produced a large increase in the incidence of these killings, either. The line is bending upward, but it remains close to historical lows.

So, in the tumult of the past few years, it looks like the rate of population displacement has surged while the rate of battle deaths has risen more slowly and the rate of one-sided violence targeting civilians hasn’t risen much at all.

If that’s true, then why?

Improvements in medical care in conflict zones are probably part of the story, but I wonder if changes in norms and values, and in the international institutions and practices instantiating them, aren’t also shaping these trends. Governments that in the past might have wantonly killed populations they regarded as threats now seem more inclined to press those populations by other means — not always, but more often.

Meanwhile, international organizations are readier than ever to assist those groups under pressure by feeding and sheltering them, drawing attention to their miseries, and sometimes even protecting them. The trend may be fragile, and the causality is impossible to untangle with confidence, but it deserves contemplation.