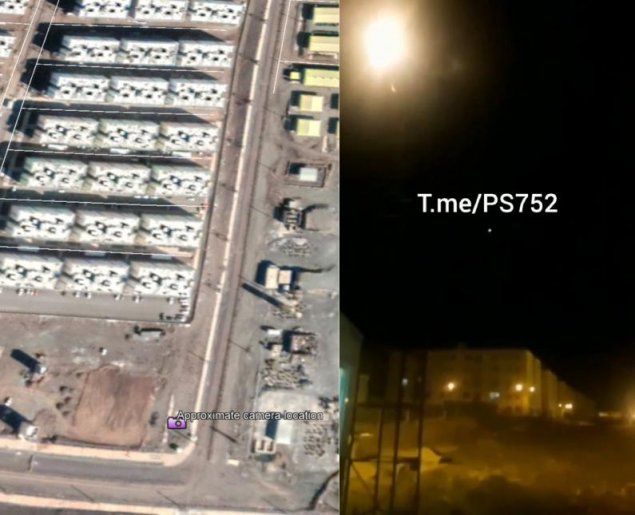 On January 9th, a video spread online after it was posted onto a public Telegram channel showing what was apparently a mid-air explosion.

The New York Times has contacted the person who filmed the video, received it in high resolution, and confirmed its authenticity. Below, an annotated version of the video created by Jake Godin (Newsy) highlights the events of the brief clip. (Uploaded directly here)

We have geolocated this video to a residential area in Parand (coordinates 35.489414, 50.906917), a suburb to the west of Imam Khomeini International Airport, from which Ukraine International Airlines Flight 752 (PS752) departed to Kyiv.

The camera here is facing northeast, towards the flight trajectory of PS752. A number of elements in the source video can be found in satellite imagery, including a series of apartment blocks, a number of light fixtures, and a construction area to the immediate left of the camera position. In new satellite imagery posted on Terraserver dated 15 November 2019 (not included in this article due to copyright issues), the buildings visible in the video are constructed and in the same position.

It is unclear why the person holding the camera was filming at the time, but it is possible that there were two missiles, prompting the decision to start filming for the second strike. The New York Times reported that the person filming started doing so after hearing “some sort of shot fired“.

While the footage showing an apparent missile strike has been geolocated, two photographs apparently showing part of a Tor M-1 missile have yet to be verified, despite claims from a number of sources. The warhead is located midway on the missile, meaning that its nose may not be destroyed in an explosion. A number of similar photographs of Tor missile fragments have been taken in eastern Ukraine, but none have been discovered to be the same as the ones attributed to the recent incident.

The origin of these photographs is still being determined, as the people who snapped the images have not come forward publicly. This object is likely located in a residential area near Parand, not near the crash site. Both of the images show the same location and object, as seen with many of the same rocks and damage patterns on the curb.

If you make any progress in geolocating these two photographs of the missile fragment, please leave your ideas in the comments, or tweet at us.

Edit: A previous version of this story had a typo in the title for “PS572” instead of “PS752”. This has been fixed, but the typo persists in the URL.