Vladimir Putin and his minions continue to whitewash the Stalinist past (washingtonpost.com) 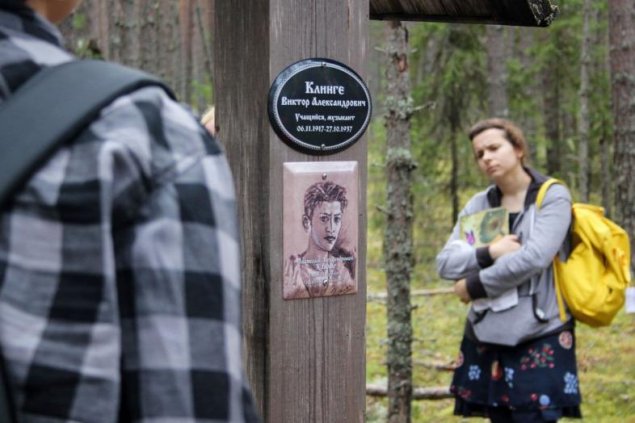 This past week, the Russian Military Historical Society — a government-affiliated body headed by Vladimir Putin’s culture minister, Vladimir Medinsky — concluded its second research expedition to the Sandarmokh forest in the northwestern region of Karelia. Its purported aim was to “find the remains of the prisoners of Finnish concentration camps and fallen Red Army soldiers” dating from the 1940s.

The real reason behind the effort was revealed in a letter from Karelia’s acting culture minister Sergei Solovyev to the leaders of the expedition. “Speculation around the events in the Sandarmokh forest not only cause harm to Russia’s international image [and] create an unfounded feeling of guilt in the public mind toward the supposed victims of repression … but also serve as a consolidating factor for the anti-government forces in Russia,” wrote Solovyev, encouraging the society to find an alternative explanation for the mass burial sites in the forest.

Sandarmokh is a unique place in Russia: the most well-documented of all the sites where victims of Stalin’s Great Terror, also called the Great Purge, were buried in unmarked mass graves in 1937 and 1938. Historians cautiously estimate the total number of those fallen in that purge at between 700,000 and 1.2 million people. Nearly 10,000 of them lie in this 25-acre forest between the towns of Medvezhyegorsk and Povenets, executed over a 14-month period and buried in 236 communal pits. According to the first-hand account from NKVD officer Mikhail Matveyev, who commanded the killings (and who lived well into his old age until the 1970s), he made the victims lie face down in the prepared trenches before shooting them at point-blank range. Those buried in Sandarmokh include peasants displaced by Stalin’s collectivization; prisoners of the Solovki concentration camp and those working on the construction of the White Sea Canal; fishermen and hunters from nearby villages; literary figures; scholars; scientists; military and political leaders; clergy of different religious denominations. All in all, representatives of 58 ethnic groups from several Soviet republics and foreign states were murdered in Sandarmokh.

“This is a special place,” says Irina Flige of Memorial, an organization that works to document Soviet-era purges. She added: “We know the names of all the people who were killed and buried there. We know who committed these atrocities — from the criminal orders issued by Stalin to the rifleman who stood in the security cordon.” The credit for this detailed knowledge belongs to Memorial itself. Using information found in the briefly declassified archives in the early 1990s as well as accounts from those who could still remember, Yury Dmitriev — a historian and Memorial’s leader in Karelia — led several expeditions to Sandarmokh beginning in 1997, uncovering graves and eventually documenting the names of everyone buried here. Since 1998, Sandarmokh has held the status of a memorial cemetery, with annual remembrance vigils held on Aug. 5, the anniversary of the NKVD decree that launched the Great Terror in 1937.

For many years, government officials and senior clergy from the Russian Orthodox Church took part in the ceremony. Several years ago, this stopped. In 2016, Dmitriev was arrested on charges widely viewed as politically motivated; he is one of the 305 people currently designated by Memorial as political prisoners. The repeated expeditions by the Military Historical Society aim to “refute” historical truth by attributing the remains at Sandarmokh to those killed in World War II — not Stalinist terror.

Such attempts might be an insult to historical memory — but they fit neatly into the pattern of public rehabilitation of the Communist regime and the whitewashing of its crimes that began with Putin’s ascent to power two decades ago. Early in his first term as prime minister, he restored a memorial plaque to Soviet KGB chairman Yuri Andropov and, after Putin was elected president, the music of Stalin’s national anthem, both of which had been discarded in the democratic wave of the 1990s. On Putin’s watch, the education ministry approved a textbook that justified Stalin’s purges as having created “a new class of management suitable to the goals of modernization.” Monuments to the Soviet dictator were erected in Novosibirsk, Arkhangelsk, Penza and other cities. It is becoming fashionable among Russian officials — especially those in law enforcement — to put up portraits of Stalin on their office walls. Why should they hesitate when their president refers to the fall of the Soviet empire as “the greatest geopolitical catastrophe of the 20th century”?

For Putin, appeals to the Soviet past are above all a way of legitimizing his rule. Justifying past repressions of citizens and aggression against others — and trying to eliminate, to quote the Karelian minister, the “unfounded feeling of guilt” — is more about Putin than Stalin.

And that brings the quest for historical truth and the power of historical memory to the forefront of today’s struggle against authoritarianism in Russia. In this regard, Memorial’s work to protect Sandarmokh is no less important than the protests against election fraud currently taking place in Moscow. Both sides understand this well. “Just like the former [Soviet] rulers, the current ones … realize their lack of legitimacy,” says Memorial’s Irina Flige. “[The Karelian minister’s letter] is written by those who are mortally frightened of being punished for crimes — both past and current ones. … We should be in awe of this text because it reveals their true mindset.”