What happened at Putin and Zelensky's first ever meeting 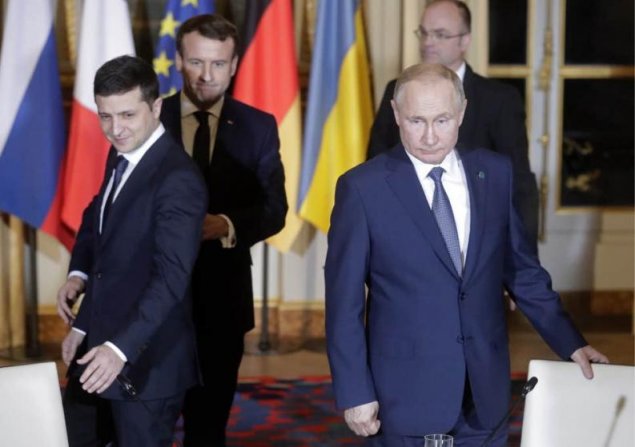 Sitting two seats away from the leading architect of his country’s five-year war, the Ukrainian president Volodymyr Zelensky said he had travelled to Paris in the hope of reaching consensus to bring the conflict to an end.

“The important thing for me is human life,” Mr Zelensky said in the press conference that followed six hours of talks. “It’s why I’m here.”

It was the first time the two leaders met in person – and the first convocation of the “Normandy” peace negotiating quartet of France, Germany, Russia and Ukraine since 2016.

By the end of the evening, there was a new agreement for a full prisoner exchange and ceasefire before the new year. There was also a commitment to three pilot troop disengagement zones and de-mining. But the sides did not get close to a political settlement to the conflict.

Volodymyr, meet Vladimir: Can Ukraine dare to dream of peace?
Presidents Zelensky and Putin spent nearly an hour and a half in bilateral talks, sandwiched in between two sessions of four-way peace negotiations.

On conclusion of the talks the Russian leader announced he was “very pleased” with the way things had gone.

In the run-up before the summit, both sides played down the possibility of a major breakthrough, suggesting that the resumption of diplomatic negotiations represented progress in itself.

The final communique in this sense did not fail to disappoint, lean as it was on new announcements.

Likewise, there was no breakthrough on the parallel issue of gas transit contracts. This remains a sensitive point ahead of the anticipated completion of the Nord Stream 2 pipeline linking Russia to Europe next year. According to Yuriy Vitrenko, the director of Naftogaz, Ukraine’s state-owned oil gas company, the sides merely “agreed to keep trying to agree”.

“Dialogue must be welcomed, but considering the destruction caused by more than five years of war, it will not be straightforward,” he told The Independent. “The Ukrainians on both sides of the contact line, who continue to suffer from this war, must be the main focus of those with power to end the bloodshed.”

Nearly 14,000 people have lost their lives since the conflict began in spring 2014. While the rate of attrition has dropped from the high points of the conflict in 2014 and 2015, sporadic fighting continues between Ukrainian troops and Russian-backed separatists.

Threat of injury and death remains a reality for the 3.5 million estimated to live inside the conflict zone.

In his unexpected campaign to become president, Mr Zelensky pushed hard on a pledge to end the war within twelve months of assuming office. Since his landslide win, many other things have got in the way – not least the complication of becoming involved in an impeachment inquiry in the United States. But that has not prevented the former comedian from pursuing the issue with fresh urgency.

Mr Zelensky’s strategy is not without domestic critics. He has been accused of naivete – “fanatical stubbornness” in the opinion of one former presidential advisor – and criticised for agreeing to concessions without first securing a shift in the Kremlin’s position.

Even as the leaders spoke in Paris, activists associated with the former president Petro Poroshenko and other opposition leaders were erecting tents outside Mr Zelensky’s office in Kiev. At midnight local time on Monday, several hundred protesters remained.

Political fallout has already hit the president’s previously sky-high approval ratings – dropping 20 percentage points from a high of 73 per cent just a few months ago.

Last week, Mr Zelensky confronted his critics by saying he was right to take violence off the table without preconditions. Speaking to a group of western journalists, he said he would not agree to war in the east: “I know there are a lot of hotheads, especially those who hold rallies and say, ‘Let’s go fight and win it all back!’ But at what price? What’s the cost? I won’t do it.”

At the press conference, Mr Putin insisted the sides follow the full implementation of the February 2015 Minsk peace agreement, named after the Belarusian capital where it was negotiated. The accords, agreed while Ukraine was on the retreat, include provisions on a ceasefire, withdrawal, amnesty, and control of Ukraine’s eastern border.

It is the sequencing of these measures that has proven most contentious. Moscow insists on preserving the order in which they appear on paper, i.e. elections before border control. Kiev argues its sovereignty would be undermined if elections take place before securing border control. None of that was resolved in Monday’s talks.

“Why hide what is written in the Minsk agreements?” Mr Putin asked. “They are being rewritten. Every point is connected to one another. If we open up one point, we will need to open up the whole agreement.”

Pavlo Klimkin, who was Ukraine’s foreign secretary until September this year, told The Independent that Kiev signed the Minsk agreements knowing their “literal” implementation was impossible.

“If you take them literally, no way,” he said, in an interview which took place last month. “I’m not saying we were not willing to implement. But literal implementation was never possible.”

Privately, this may be one area where both sides agree. Speaking with The Independent on condition of anonymity, a high-level Kremlin insider said that Moscow understood there was little prospect of President Zelensky complying with the Minsk accords and staying in power.

“No Ukrainian president can fulfil the Minsk agreements as they are written without provoking a revolution,” the source said. “There is no solution. There might be improvements, things might get worse. But there is a growing understanding that this is a frozen conflict and it will stay with us for the next 100 years.”