Will The OSCE ‘Democratize’ Russia’s Occupation in Ukraine’s Donbas? 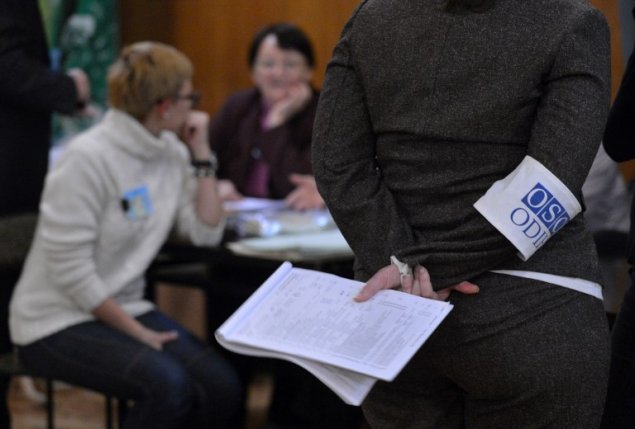 Kyiv has co-signed with Russia and the Donetsk and Luhansk “people’s republics” (DPR, LPR) a commitment to: a) accept the holding of “local elections” in that Russian-controlled territory of Ukraine and b) accept the Organization for Security and Cooperation in Europe’s (OSCE) monitoring and assessment of the democratic validity of such “elections.” Under those documents, signed on October 1, the OSCE’s validation of those “elections” would qualify the Donetsk-Luhansk territory for a permanent “special status,” as originally prescribed by the Russia-dictated Minsk armistice (see EDM, September 17, 24, 25, 26, October 3).

For the first time in the history of Russia-orchestrated conflicts, the OSCE now declares itself prepared to observe and evaluate “elections” in a territory occupied or controlled by Russia—in this case, in Ukraine’s Donbas. The OSCE is thereby breaking with its own practice of refusing to take notice of such “elections.” This organization never considered becoming involved with “elections” or “plebiscites” in Moldova’s Transnistria region, in Georgia’s Abkhazia and South Ossetia regions, or (from 2014 onward) in Crimea and the Donetsk-Luhansk territory. The OSCE reacted to every such “election” or “plebiscite” (including those staged in Donetsk-Luhansk in 2014 and 2018) by rejecting the legality and legitimacy of those votes. In that light, dignifying upcoming “elections” in Donetsk-Luhansk with monitoring and evaluation by the OSCE would be a major concession to Russia.

Russia, France and Germany (in that order) are prepared to instrumentalize the OSCE for that purpose. Moscow’s obvious political objective is to have the OSCE validate the outcome of Donetsk-Luhansk “elections.” These are supposed to provide a democratic-looking cover for this territory’s “special status” and for international acceptance of that status: nominally within Ukraine but de facto under Russia’s control, undermining Ukraine from within. For their part, Paris and Berlin want “elections” in Donetsk-Luhansk to change the definition of this international crisis. Their goal (overlapping with Moscow’s) is to redefine Russia’s aggression against Ukraine into an (ostensibly) internal problem for Ukraine and to “normalize” relations with Russia.

Under the “Steinmeier Formula,” agreed on October 1, Kyiv would bring that territory’s special status temporarily into force even before the OSCE validates those “elections,” then bring it permanently into force if the OSCE validates those “elections.” The first step in that sequence amounts to introducing the special status preemptively. If Kyiv is rushed into proclaiming the special status ahead of the vote count and tabulation, simply because elections were physically staged, it would then become politically prohibitive for Kyiv to revoke the special status if significant fraud occurs in the vote count and tabulation. The second step in that sequence clearly implies automaticity, there being no provision for Ukraine to stop the approval of the permanent effect of the special status. All this compromises from the outset any pretense of “democratic”conditionality of that status. The procedure is designed to entrap Ukraine and misuse the OSCE for legitimizing Russia’s proxies.

Kyiv committed itself to the Steinmeier Formula on October 1 alongside Donetsk and Luhansk, in identically-worded letters, mediated by the OSCE and addressed to the OSCE’s Chairmanship (see EDM, October 3). This procedure is not strictly a part of Steinmeier’s Formula, but a bonus on top of it for Moscow and the DPR-LPR. The procedure has placed Kyiv in a co-equal position with Donetsk-Luhansk. It is also setting the stage for follow-up negotiations between Kyiv and DPR-LPR regarding the legal basis and modalities of those “elections.” President Volodymyr Zelenskyy has thereby conceded key negotiating positions that Ukraine had defended since 2015.

Russia, France (up front) and Germany (in the background) had all asked Zelenskyy to satisfy Russia’s demand and accept Steinmeier’s Formula. The same three powers jointly devised the signing procedure that equalized Kyiv with Donetsk-Luhansk (see above). The OSCE’s mediator, Martin Sajdik, shepherded that co-equal signing in the Minsk Contact Group. The OSCE’s chairperson-in-office (for 2019), Miroslav Lajcak, publicly urged Kyiv to accept the Steinmeier Formula (Dzerkalo Tyzhnia, September 14). Lajcak then became the official depository of Kyiv’s, Donetsk’s and Luhansk’s identically worded letters of acceptance. The OSCE is now poised to mediate negotiations between Kyiv and the DPR-LPR in the Minsk Contact Group regarding a special electoral law for the Russian-controlled territory. Such actions by the OSCE contribute to advancing Russia’s agenda against Ukraine.

Russia is a habitual critic of the OSCE’s specialized election-monitoring and -evaluating body, the Office of Democratic Institutions and Human Rights (ODIHR). Russia has developed its own methodology and standards for observation and assessment of elections, challenging ODIHR’s methods and standards. Yet, Russia is keen to have that same ODIHR tasked with handling the Donetsk-Luhansk “elections.”

Russia, France and Germany have successfully pressured Ukraine in the “Normandy” format to accept the lowest possible bar for those “elections” to be validated by ODIHR: namely, if they “on the whole [sic]” correspond with ODIHR’s “and international” criteria. The Russian side had proposed this peculiar formulation long ago. France and Germany have ended up approving it, resulting in Kyiv’s approval, to Russian Foreign Minister Sergei Lavrov’s satisfaction (Interfax, October 2). Moscow evidently hopes that ODIHR would yield to a political command, give “elections” in Donetsk-Luhansk some sort of a passing grade, and possibly even assist with their preparations.

These would-be elections are “local” ones, on the level of districts, towns and villages, as per the September 2014 Minsk armistice. The original purpose was to elect local mayors and councils on those levels. In November 2014, however, Russia had “elections” staged for “presidents” and “parliaments” of the Donetsk and Luhansk “people’s republics”; and Moscow staged the same type of “elections” there again in 2018. These moves have eviscerated the political clauses of the Minsk “accords.” Any “elections” for lower-level administrative units (district, town, and village mayors and councils) would not affect DPR’s and LPR’s “parliaments” and “presidents.” They, indeed, are supposed to negotiate with Kyiv about jointly administering those local elections. The OSCE is already mediating such an agreement between Donetsk-Luhansk in the Minsk Contact Group. Such local-level elections would make Russia’s proxy authorities in the two “people’s republics” look “democratic,” and their “special status” claim look legitimate, if the OSCE gives those elections a passing grade.

This territory has never known democratic elections or political pluralism. It was the most profoundly Sovietized part of the Ukrainian SSR; became the last stronghold of the Ukrainian Communist Party in the 1990s, then the main base of support for Viktor Yanukovych’s Party of Regions until 2014. Following Russia’s military intervention, this territory has been suffused with “Russian World” (Russkiy Mir) propaganda, closed to any countervailing messages. In such circumstances, and in the presence of Russian and proxy forces, elections are unthinkable in this territory, unless they are designed to meet the Kremlin’s terms. Russia intends to instrumentalize the OSCE toward that goal.